all aboutparenting.com
Home About Us

It’s published by normal housewives of homesteading families who live in the United States of America but share the same goal… Helping others as we learn along our journey of creating an ever changing homestead. We share with you what we’ve learned along the way.

The Homestead Survival is an collection of knowledge and skills as we transition out of a modern way of living and our journey back into into the self sufficient world of living off the land.

Forgotten skills, reviving old wisdom, embracing simplicity, nurturing family and finding yourself along the seasonal rhythms as they change.

Homesteading today means a back to the land movement, learning real skills that are becoming lost art forms, recognizing what natures offers, creating food storage through different food preservation methods, growing your own food through organic gardening and fruit and nut orchards, learning how to work with the land instead of against it, embracing hard work and in the end gaining a strong sense of self. Deep satisfaction and independence is earned by the people willing to devote themselves to it’s pursuit.

Many homesteaders feel that their lifestyle is healthier and more rewarding than more conventional consumerism driven patterns of living.

A homesteader can live in urban, suburban or rural areas: each area presents it’s own set of challenges of how to use the amount of land available to the best of it’s ability. Homesteading is a mindset that can be practiced anywhere by anyone who wants to embrace the old ways, maybe even improve them. A growing public concern about air and water pollution has empowered people to seek alternative renewable sources of energy as a way to become independent from public utilities. Geothermal, Wind, Solar (sun), Hydro (water), biomass (wood) are just a few methods that are used.

We believe inspiring readers about homesteading, self sufficiency and emergency preparedness is important in creating a change in the world that starts in a place we can control, on our own homesteads and within our families.

What are some subjects we feature on The Homestead Survival: 8 Tips for Maximizing Your Mulch Usage in the Garden The Benefits of Using Rubber Hunting Boots For Deer Hunting 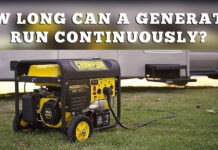 How Long Can a Generator Run Continuously? 11 Tools You Need to Start Your Own Vegetable Garden How to select the right water tank for your farm?